A pregnancy begins with conception. A child is conceived when the male sperm successfully fertilises the female egg. Successful fertilisation is most likely during a 24-hour period following the L.H. surge. Since this window is only open once a month and for a short period of time, being able to predict the L.H surge is very helpful when trying to become pregnant.

We have selected these ovulation tests for their price, accuracy and reliability. Both these tests look for the presence of L.H. in urine.

To see a copy of the test insructions please click on the appropriate link.

What is the difference between the 2 types of ovulation tests?

The 2 tests we have chosen are both the same as far as accuracy and reliability, the reason for the price difference is due to the different ways the tests are carried out.

The ovulation dip strip is the cheapest – this is because it is just a strip that is dipped into your urine specimen. The easiest test but the most expensive is the midstream, all that is involved with the midstream is to hold the test in your urine stream.

This test is greater than 99% accurate in laboratory testing.

How does a home ovulation test work?

When a woman is about to ovulate, her body releases a large amount of a hormone called L.H. (Luteinising Hormone). L.H. is always present in your urine but the levels increase (surge) in the middle of your cycle, causing you to release an egg from the ovary, this process is called ovulation. If the L.H. surge is present, ovulation is likely to occur in the next 24 to 48 hours.

These ovulation tests detect the L.H. surge by measuring the amount of L.H. in urine.

Once I receive a positive result, when is the best time to have intercourse?

Ovulation usually follows the start of the L.H. surge within 24-48 hours. This is the time when you are at your most fertile, therefore you should have intercourse during this time.

What happens if after using the 5 tests provided I have still not detected my L.H. surge?

Most women with regular cycles will detect their L.H. Surge in 5 days or under and so 5 tests are sufficient, however, if you have irregular cycles you may need to test for longer and may require additional ovulation tests to detect your L.H. Surge

I have recently come off the contraceptive pill will this affect my result?

As the pill disrupts your natural hormone balance it may take a few months for your periods to return to normal. You may want to wait until you have had 2 normal periods before starting to use this ovulation test. Please be aware that pregnancy and breast feeding could affect the results of this test.

Will alcohol or other common medications affect the results of this test?

No, but you should consult your doctor if you are taking any hormonal treatments.

Can I use the ovulation test for contraception?

No, the test is not designed to prevent contraception. As sperm can survive for 72 hours you might still become pregnant if you had intercourse before you detected your L.H. Surge

I had a positive result for the L.H. Surge and had sexual intercourse during this period but I have still not become pregnant.

There are many factors that can affect your fertility. It can take many healthy couples months to achieve pregnancy. You may need to use these tests for a few months before pregnancy occurs. If after 6 months of trying you have still not become pregnant, you should visit your doctor for advice. For more information and tips on trying for a baby

Ovulation is the release of an egg from the ovary. The egg then passes into the fallopian tube where it is ready to be fertilized. A child is conceived when the male sperm successfully fertilizes the female egg.  When a woman is about to ovulate, her body releases a large amount of a hormone called L.H. (Luteinising Hormone). L.H. is always present in your urine but the levels increase (surge) in the middle of your cycle, causing you to release an egg from the ovary.

The One Step Ovulation Test is an immunochromatographic in-vitro assay for the qualitative and semi-quantitative determination of the human luteinizing hormone (LH) in urine to predict the time of ovulation in women. One Step detects the sharp increase in LH concentration in urine, the so called “LH surge” which precedes ovulation.  Conception is most likely to occur within 36 hours following the LH surge.

Each pouch contains one immunochromatographic test. Each test contains a membrane with an anti-LH antibodies and conjugates, in a stabilizing matrix containing proteins and sodium azide.

One Step is for in vitro diagnostic use only.

One Step is not designed to prevent contraception. As sperm can survive for 72 hours you might still become pregnant if you had intercourse before you detected your L.H. surge.

WHEN TO BEGIN TESTING:

For example, if your usual cycle is 28 days.  If your first day of last menstruation is 7th, you should begin testing on day 18th.

<  >– Begin testing with the One Step Ovulation Test (Urine).

If your cycle is shorter than 21 days or longer than 40 days, consult your doctor. If you do not know your cycle length, you may begin the test 11 days after your first period since the average cycle length is 28 days. Perform 1 test each day until the LH surge has been detected.

Once you have identified what day you should begin testing you should then begin to collect your urine on a daily basis.

1 Read the instructions thoroughly before you begin.

2. Do not open the foil pouch until you are ready to begin the test.

3. Make sure you have a watch, clock or timer ready.

3. With the arrows pointing downwards towards the urine, place the test strip vertically (straight) into the urine sample, for at least 10 seconds. DO NOT allow the urine to go above the MAX (maximum) level line.

4.Remove the strip from the urine and place on a clean, dry surface. For best results you should read the results at 8 minutes.

5.NOTE Do not interpretOne Stepresults after more than five minutes. To avoid confusion, discard the test after registering the test result at 10 minutes.

After each test, you must decide if you are having a L.H. surge.

If two colour bands are visible and the test band is of equal or greater colour intensity (darker) than the control band, this is a positive result and a good indication that the L.H. surge is occurring. You should ovulate within the next 24-36 hours. Sexual intercourse on the evening of the first positive test is advised.

If two bands are visible but the test band is of a less intense colour (paler) than the control band or cannot be seen, this means the L.H. level is at or near its normal level and that the surge is not in progress. You should continue with daily testing.

If no control band appears within 5 minutes, the result is invalid and should be ignored. A visible control line is needed in all cases to confirm a proper test result. Repeat test with a new test kit.

The One Step Test is an immunochromatographic one step assay designed for in vitro qualitative determination of human luteinizing hormone (hLH) in urine to predict time of ovulation.  LH surge usually comes before ovulation, which means release of an egg. An egg can only live for 24 hours or less after it is released, while sperm survives only a few days in your body.  Consequently, the One Step Test can help you predict the two most fertile days following the detected LH surge.  Having intercourse within these days will maximize your chances of becoming pregnant.

Each One Step Test midstream is individually sealed in a foil pouch.

The test kit is to be stored at room temperature in the sealed pouch for the duration of the shelf life.

Do not use the test kit beyond the expiry date.

WHEN TO START TESTING:

For example, if your usual cycle is 28 days.  If your first day of last menstruation is 7th, you should begin testing on day 18th.

<  >– Begin testing with the One Step Ovulation Test (Urine).

Choose a convenient time of the day to perform the test. Try to test at about the same time each day for the entire cycle. For best results, test between 10:00 am and 8:00 pm.

1. Remove the midstream test from the foil pouch.

3.Hold the midstream test by the Thumb Grip with the exposed Absorbent Tip pointing downward directly into your urine stream for at least 10 seconds until it is thoroughly wet.

4. Note: Do not urinate on the Test and Control windows. If you prefer, you can urinate into a clean and dry container, then dip only the Absorbent Tipof the midstream test into the urine for at least 10 seconds.

6.Read the results at 5minutes

7.DO NOT INTERPRET RESULT AFTER 10 MINUTES

INTERPRETATION OF RESULTS – (The Test (T ) window shape may vary slightly. The Control (C) window is always a circle) 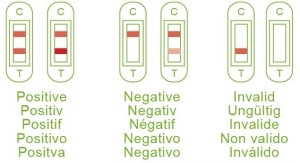 
How to do a Sperm Test at Home Privately