The stomach is an organ of the digestive system. The stomach’s major functions are related to the digestion of food. After swallowing, the food is held in the stomach. The mucus lining of the stomach secretes acidic gastric juices. These act on the food and begin to break it down. At the same time the stomach’s muscles contract and squeeze helping to physically break down the food. The food then becomes a thick fluid and is moved into the duodenum where digestion continues. 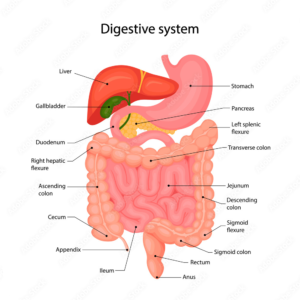 What is stomach cancer?

Stomach cancer also known as gastric cancer, is a disease in which  malignant cancer cells are found in the tissues of the stomach. It occurs most frequently in men over 40 years of age. Approximately 12,000 people in the U.K. are diagnosed with this disease each year.

Stomach cancer arises from changes in the internal lining of the stomach, the part that is responsible for secreting the acid, fluid and other chemicals. This layer is complicated because as well as having to secrete, it must also protect itself from the acid that it produces, otherwise it would damage the stomach lining and cause an ulcer.

The exact cause of stomach cancer is unknown. However, there are many risk factors thought to play a part in the cells becoming cancerous. These are as follows:

What are the symptoms of stomach cancer?

Symptoms of stomach cancer may include any of the following:-

These symptoms are common to a number of other less serious conditions, such as gastritis or an ulcer. So most people who visit their doctor with these symptoms will not have cancer. However, it is important to have any symptoms you are experiencing checked.

How can I prevent getting stomach cancer?

Experts believe that diet could play a major part in most stomach cancers. Smoking tobacco and drinking alcohol will slightly increase the risk of stomach and other cancers developing. Try to maintain a healthy balanced diet as this offers some protection to all types of cancer.

How is stomach cancer diagnosed?

Your doctor will normally refer you to a hospital for tests and he/she may ask you to bring a stool sample to the hospital with you. At the hospital you may have a gastroscopy and/or a barium meal. A gastroscopy is a thin telescope that is inserted into the stomach, via the mouth, so that the doctor can examine the area more closely. If an abnormal area is found, a small sample of cells ( biopsy) may be removed for analysis under a microscope.

A barium meal is an X-ray of the oesophagus and stomach. A liquid called barium is swallowed to highlight the area, making it easier for the doctor to spot any tumours or abnormal areas.

What is the treatment of stomach cancer?

If stomach cancer is diagnosed, the specific treatment you receive will depend on your age, health, medical history and the extent of the disease. If stomach cancer is caught early it is treatable surgically, part or all of the stomach is removed (the stomach is not essential to life, but it’s removal does often lead to some symptoms after meals) along with surrounding tissues and nearby lymph nodes. Chemotherapy is sometimes used after the operation to reduce the risk of the cancer returning.

If stomach cancer is left untreated, it can spread to the lymph nodes, abdomen, lungs and other parts of the body. It is important that if you are worried about any symptoms that you have, you visit your doctor for advice.