Endometriosis can be quite hard to understand and it can be a distressing and painful disease. Endometriosis is a very common condition affecting 10% of reproductive-age women. It is most common between the ages of 20-30 and among those who have not had children. It is also thought to be more common in women who started their periods at an early age. 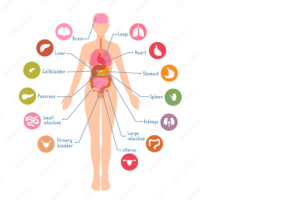 The inside lining of the uterus (womb) is called the endometrium, during the menstrual cycle the thickness of the endometrium increases in preparation for a fertilised egg. If pregnancy does not occur the lining is shed as a ‘period’. Endometriosis is a condition where the cells that are normally found lining the uterus are also found in other areas of the body. Some of the less common and rare sites include the liver, lungs, kidneys, nose, ears and eyes. The most common places for the tissue to be found is the ovaries, fallopian tubes, bowel (colon), bladder, intestines, uterus and  abdominal cavity.

Each month the tissue that is outside the uterus responds to the changes in hormones and builds up and breaks down in the same way as the lining of the uterus. However, the internal bleeding has no way of leaving the body, unlike that in the uterus and so gets trapped. This bleeding forms patches which tend to be sticky, this can cause various organs to stick together. For example the bladder may ‘stick’ to the uterus. These areas of tissue are known as adhesions. Large patches of endometriosis can also form swellings which fill with dark blood known as ‘chocolate cysts’. These cysts bleed each month when you have a period.

What are the symptoms of endometriosis?

Endometriosis can be present without causing any symptoms and the strange thing about the condition is the severity of the disease does not have anything to do with the symptoms that can be felt. Some women who have a mild form of the disease can have worse symptoms than someone who has the disease quite severe.

Pain may also occur when you pass water or open your bowels, especially during your period.

Nobody is really sure of the exact cause of endometriosis. One possible cause is that during a period some blood instead of passing through the cervix and outside spills backwards up the fallopian tubes and into the pelvic area where it attaches to another surface, this is known as retrograde menstruation. However, others believe that all women experience this but the immune system automatically destroys the abnormal tissue before it attaches. But if the immune system is unable to get rid of the tissue, endometriosis develops.

Another theory is that remnants of a woman’s own embryonic tissue, which formed whilst she was in her mothers womb, may develop into endometriosis during adulthood.

A family history could mean you are more susceptible. Also if you have heavy, frequent periods your likelihood of developing endometriosis increases.

How is endometriosis diagnosed?

Although a doctor may suspect endometriosis from the symptoms he may perform a pelvic exam to check for cysts, unusual tenderness or a thickening of the pelvic area. An ultrasound may also be carried out to have a look at the pelvic area. However, the only real way to confirm a diagnosis is with a laparoscopy. A laparoscopy is a procedure which involves inserting a thin, flexible, tube like telescope, called a laparoscope into a small cut near your naval. The surgeon can view all the organs and if any cysts are found they may be drained or removed.

How is endometriosis treated?

Though endometriosis can not be cured at present, symptoms can be controlled by drugs and surgical options. The treatment depends on the severity of your symptoms, the location and your plans on having children.

Since endometriosis grows in response to hormones in the menstrual cycle anything that stops this cycle from occurring will prevent or slow down endometriosis growth. As a result 2 natural treatments for endometriosis are pregnancy and the menopause, although pregnancy will only provide temporary relief and symptoms are very likely to return once you start to ovulate again.

Drugs used to treat endometriosis therefore attempt to mimic pregnancy or the menopause. Pills which are like the female hormone progesterone or the contraceptive pill can be taken continuously (e.g. without the 7 day break) and will stop periods from occurring in a way similar to pregnancy. Drugs such as antiprogestogens and Gonadotrophin-releasing hormone (GnRH) analogues can be given which mimic the menopause by reducing the production of oestrogen.

Unfortunately these drugs can have side effects such as weight gain, acne, hot flushes, nausea and increased body hair. It is also important that you do not get pregnant whilst on these drugs as they may have an effect on the baby.

Some forms of endometriosis growth can be treated during the laparoscopy where any deposits, scar tissues or cysts can be destroyed or removed. Severe endometriosis may require a bigger operation called a laparotomy, an operation which looks at your abdomen from a cut in your stomach. A laparotomy is carried out when endometriosis is so widespread that it can’t be handled through the tiny incision used in laparoscopic surgery.

If endometriosis is severe and if a woman has completed her family then a hysterectomy may be performed, although it does not provide a cure in every case. If you are recommended a hysterectomy, seek a second opinion as all major surgery carries risks and it is important you are fully informed of the risks and benefits of surgery, in your particular case.

Although exercise can be difficult when suffering with chronic pain, endometriosis gets worse when you don’t move.  Gentle exercise such as walking and swimming can help ease symptoms.  If you suffer with chronic pain long term use of over the counter painkillers are not a good idea. Discuss pain relief options with your GP or request a referral to a local pain clinic.

What are the complications of endometriosis?

One of the most frequently asked questions is will it cause infertility? In women with milder cases of endometriosis, it is not unusual for a woman to be able to conceive naturally. However for those with more extensive endometriosis, repeated internal bleeding can cause scar tissue to form around ovaries and fallopian tubes, causing an obstruction to the passage of the egg from the ovary to the uterus. If endometriosis is causing obstruction then treatment may be necessary. A surgical method such as a laparoscopy or a laparotomy are recommended to remove the blockages. This may not permanently eradicate endometriosis but it should provide you with time to conceive. Studies have found that in cases of mild to moderate endometriosis, removing these blockages improved the chances of conceiving for women under 40 years of age by up to 75% in the first 36 weeks after treatment

Fertility drugs can also be prescribed to help induce ovulation.

Endometriosis will often return in 1 in 5 women.