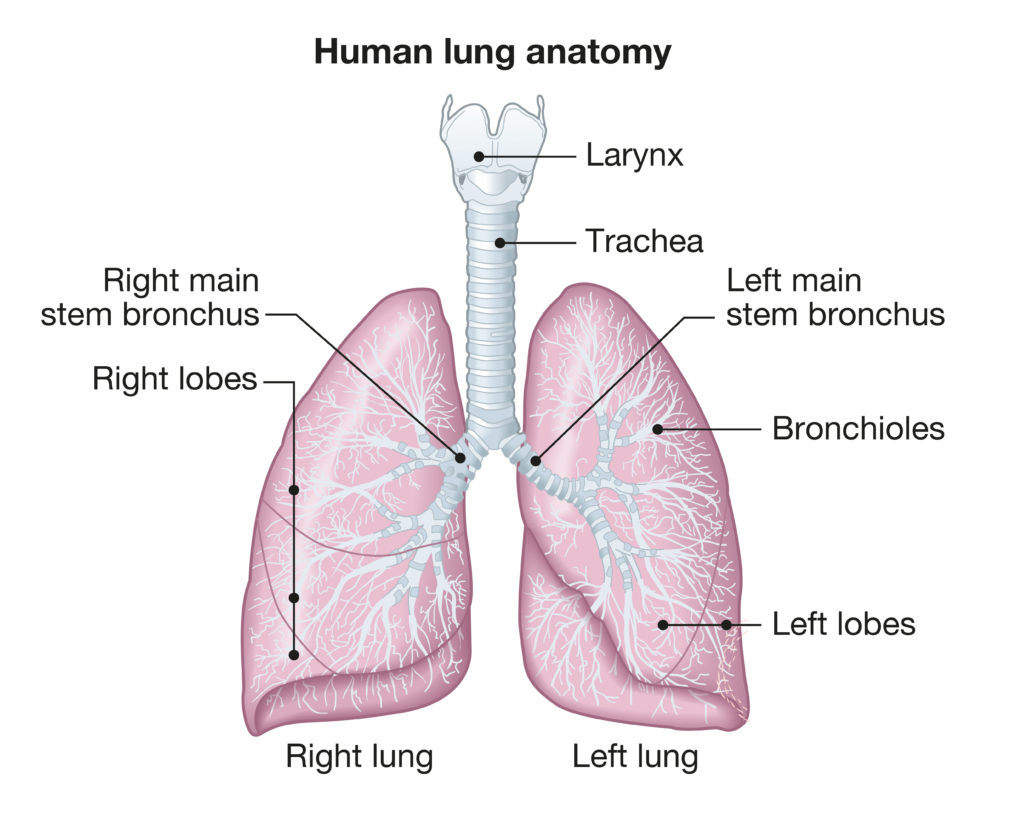 The lungs are part of the respiratory system, they are protected from injury by the ribcage and separated from the abdomen by a sheet of muscle called the diaphragm. When you breathe in, air passes from your mouth or nose through the windpipe (trachea). Once in the chest, the trachea divides into 2 airways (tubes). These are known as the left and right bronchus and one goes to each lung. The bronchus then divide into smaller tubes known as bronchioles, which carry air through the lungs.

The bronchioles form a tree like pattern, which end in millions of tiny air sacs called alveoli. This is where oxygen is absorbed into the bloodstream and circulated around the body. Carbon dioxide is the waste gas that must be removed from the body. It passes from the bloodstream into the alveoli and is expelled from the lungs when you breathe out.

What is lung cancer?

As with all cancers, lung cancer develops when cells within the lungs multiply in an uncontrolled way. The cells produced are not normal and do not carry out their usual jobs.

Lung cancer is the most common form of cancer in the U.K. and in most people the disease is related to cigarette smoking. Lung cancer has always been more common in men, especially once over the age of 40, but as more women are smoking, the number of women with lung cancer has greatly increased. In fact lung cancer currently claims more lives than breast cancer.

The biggest cause of lung cancer is smoking, approximately 36,000 people in the U.K. die from lung cancer every year, 90% of those lung cancer deaths are from smoking.

If you are a non-smoker there is a risk that you can get lung cancer from passive smoking, though the risk is not as high than if you smoke yourself. Passive smoking could be responsible for several hundred, lung cancer cases every year.

What can I do to prevent getting lung cancer?

There is no evidence that diet will prevent cancer, but a healthy diet will help you maintain a healthy weight and immune system.

What are the symptoms of lung cancer?

Symptoms of lung cancer may include any of the following:

These symptoms can occur for reasons other than cancer, e.g. a chest infection so if you have any of these symptoms you should talk to your doctor about your concerns. The earlier a cancer is diagnosed the easier it is to treat.

How is lung cancer diagnosed?

Unfortunately, there is no successful screening test for lung cancer in people who have no noticeable symptoms. If you are worried about lung cancer or your doctor suspects you may have lung cancer, he/she may recommend you have a chest X-ray. If the X-ray shows a shadow on the lungs, you will be referred to a hospital for further tests. These will usually include a bronchoscopy, which is an instrument the doctor uses to look inside the lungs. If a tumour is present, a biopsy can be taken during a bronchoscopy. A biopsy is the removal of tissue from the lung, which is sent away for analysis under a microscope. Your doctor may also want to take a sample of phlegm, especially if you have been coughing up blood.

What treatment is available for lung cancer?

If you are diagnosed as having lung cancer, the treatment you receive will depend on the type, location and size of the cancer and how far the cancer has spread. Your general health and age will also be taken into consideration.

The types of treatment available for lung cancer are surgery, radiotherapy and chemotherapy. If cancer has been diagnosed at an early stage and the cancer can be fully removed, you will be able to have surgery. You may need to have part or a whole lung removed. Patients who have one lung removed will be able to breathe normally and live a good quality of life. Radiotherapy can be given either after surgery or instead of surgery to prevent the cancer spreading.