When you and your partner are trying to have a baby you should be aware of the importance of the timing of sexual intercourse. Every month an egg matures and is released from the ovary. The egg (ovum) can only be fertilised for about 18- 24 hours after it is released, so sperm must be present in the fallopian tubes around the time of ovulation. Sperm can usually survive for around 3 – 5 days in the woman’s reproductive tract. Fertilisation is therefore unlikely unless sexual intercourse occurs up to and during ovulation.

During intercourse, millions of sperm are released into the vagina. As ovulation approaches, the cervical mucus becomes watery allowing the sperm to swim up the vagina through the cervix. 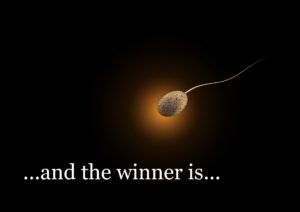 Only about 2,000 sperm will be strong enough to reach the uterus and the fallopian tube. In order for fertilisation to occur, one of these sperm must attach itself to the ovum and penetrate its outer surface. The fertilised ovum will then continue travelling down the fallopian tube, taking several days until it reaches the uterus. When it arrives, it attaches itself to the lining of the uterus this is called implantation and is the start of pregnancy.

If the ovum is not fertilised it will die and the progesterone and oestrogen hormone levels will drop. Without these hormones the prepared uterus lining breaks up and is released through the vagina along with the unfertilised egg. This is known as a ‘ period’. If the egg is fertilised the implanted embryo produces another hormone Human Chorionic Gonadotrophin (H.C.G.) which tells the ovary to continue to produce progesterone. H.C.G. is the hormone that pregnancy tests are designed to detect. Progesterone continues to be secreted during pregnancy, first by the corpus luteum and then by the  placenta, until the child is born. Progesterone blocks the release of the hormones, which are responsible for ovulation so that further eggs are not released during pregnancy.

The male must produce a sufficient number of normal, actively moving sperm in order to achieve conception. It would be a good idea for your partner to abstain from ejaculating for a few days before your fertile period, to allow sperm numbers to rise. You should only need to have intercourse once each day during your fertile period. The more a man ejaculates the fewer sperm there will be.

The male’s reproductive tract must have open pathways for the sperm to travel from the testes, where the sperm is produced, out through the penis during ejaculation. The male must be able to ejaculate into the woman’s vagina.

Sperm are produced in the testes and mature in the epididymis. The epididymis is a long oval shaped structure attached to the surface of each testis. you can easily test the motility and volume of sperm by using our male fertility test kit.

F.S.H. and L.H. stimulate the production of sperm and testosterone in the testes. The testes typically produce 50,000 new sperm every minute of every day beginning at puberty until the man is 70 years old or older. You can easily test your FSH levels by using an FSH urine test found here.

If you have only one testis, your sexual performance or ability to have children will not be affected as long as the other testis is healthy. The healthy testis will make up for the removed one by producing more testosterone and sperm.