Rabies is a disease caused by a virus that attacks the nervous system. Domestic cats and dogs can become affected.

Rabies in Cats Dogs and other Animals?

Rabies in cats dogs is quite common but the virus can also be found in humans and all other mammals. In developed countries, most cases of rabies occur in wild animals—mainly skunks, raccoons, bats, coyotes, and foxes. In recent years, increased signs of rabies in cats has become more common, because many cat owners do not vaccinate their cats and cats can be exposed to rabid wildlife, either outdoors or when bats get into the house. Rabies also occurs in dogs and cattle in significant numbers and, while not as common it has been diagnosed in horses, goats, sheep, swine and ferrets.

Rabies is a deadly disease caused by a virus that attacks the nervous system. The virus is secreted in saliva and is usually transmitted to people and animals by a bite from an infected animal. Less commonly, rabies can be transmitted when saliva from a rabid animal comes into contact with an open cut on the skin or the eyes, nose, or mouth of a person or animal. Once the outward signs of the disease appear, rabies is nearly always fatal.

What are the symptoms of Rabies?

Once the rabies virus enters the body, it travels along the nerves to the brain. Animals with rabies may show a variety of signs, including fearfulness, aggression, excessive drooling, difficulty swallowing, staggering, paralysis and seizures. Aggressive behaviour is common, but rabid animals may also be uncharacteristically affectionate.

How do I perform the Test?

It is very simple – just use the enclosed cotton swab to obtain a saliva sample, mix it with the test solution and then add 3 drops to the test cassette. You will then be able to read the results after 5 minutes. A positive or negative result is indicated by 2 or only 1 line in the test window respectively.

The best time to test is during the shedding phase and/or when the symptoms appear. If tested outside this time period, you may get a false negative result.

Further information is available on rabies by click here.

For additional information regarding the rabies virus the visit WHO. 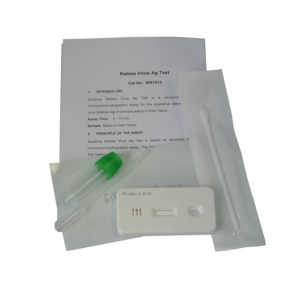 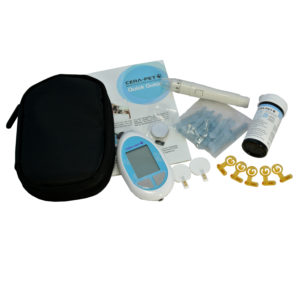 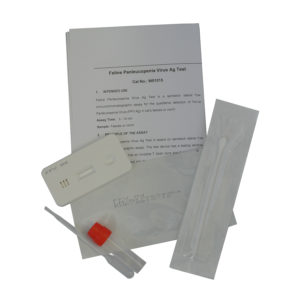